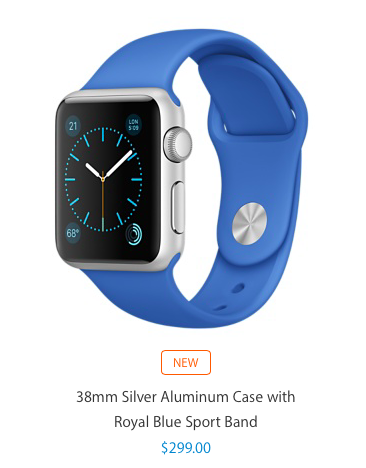 The move to make Apple Watch more financially accessible will promote sales of the device, which is already the number one selling smartwatch in the world. Increased incentives to buy the Apple Watch, such as this price drop, represent Apple’s effort to grow the product out of the accessory category the product is sometimes perceived to fall into. As with the original iPhone, price drops will make the Apple Watch a ubiquitous product.

For the first time, Apple has added a Woven Nylon band to its Apple Watch collection. Announced at the “Let Us Loop You In” event, the Nylon band marks the first time Apple has introduced an entirely new design and material for its Watch bands. The band is constructed from 4 layers of woven nylon, which gives the appearance of a striped design on the outward facing part of the band. A contrasting layer of color lines the inside of the band. The traditional watch buckle is constructed with aluminum to match the Apple Watch Sport.

The Woven Nylon band is great for anyone looking for a casual band besides the existing Sport Band. It will ship later this mont for $49 in 7 colors including Gold/Red, Gold/Royal Blue, Royal Blue, Pink, Pearl, Scuba Blue, and Black.

Apple will host a media event on March 21st at its Town Hall auditorium in Cupertino. This event will mark the first time Apple introduces new products since the announcement of the iPad Pro in November.

A new collection of Apple Watch bands is expected to debut at the event. Previously, Apple has only updated the colors of existing band designs, so it’s currently unclear whether Apple will only update the colors of its existing bands, or create all-new band designs. Some rumors suggest a nylon band could be added to the Apple Watch collection. A Space Black Milanese Loop is also expected to go on sale shortly after the event.

While the updated Apple Watch bands are widely expected, the most anticipated releases at the event will be a new 9.7-inch iPad and a low-cost iPhone SE. The new 9.7-inch iPad will see several elements of the larger iPad Pro make their way to the smaller device, including four speakers, a keyboard accessory, and Apple Pencil support. The iPhone SE will create a new entry-level iPhone offering. The phone will feature the same 4-inch screen size and design as the iPhone 5s, but offer updated internal hardware to increase performance.

The entire event will be live-streamed on Apple’s website.

In a recent Vogue interview, fashion designer Tom Ford commented on Apple Watch and its role in the fashion world. Ford says he views “Apple products as fashion accessories,” especially the Apple Watch. While designers often create iPhone cases, the Apple Watch provides a unique opportunity for designers to produce technological accessories that are meant to be worn. Ford currently sells two versions of a Pocket Watch Chain that allows users to attach an Apple Watch in the slot where bands usually attach. The chain is available in gold and silver and retails for $1,490.

Tom Ford’s Pocket Watch Chain represents how technology and design can combine to create beautiful products with powerful digital features. As more people buy Apple Watch, the device will start to look increasingly pedestrian, so innovative designers like Tom Ford can bring their signature styling to the device.

Do you view the Apple Watch as a fashion accessory?

Today, several sources reported Apple’s plan to introduce new products at a March, 15th event. Since the Apple Watch launched last April, many people assumed Apple would update the device about a year later, as the company does with other flagship products like the iPhone. Now, insiders say Apple will not launch a second generation Apple Watch this spring, but will instead update its line of Apple Watch bands. It remains unclear which bands will be updated or if any new watch bands will be announced, but expect new Sport Band colors, which Apple updated once before at a September event.

Expect the new Apple Watch bands to launch besides a new iPad Air 3 and iPhone 5se at a press event on March 15th.